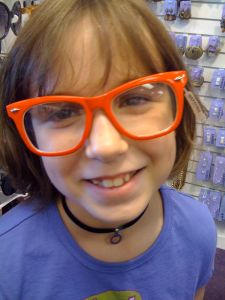 I may have mentioned recently how much I love this kid.  She’s a standard on the “what I am thankful for” list.

And one of the best things about her is that she is solidly and completely HER. The very Sprout-ness of her.  She does her own thing, she is her own girl.

She was never a princess girl. She played dress-up in the police and fireman outfits that we bought to enable her brother to participate in dress-up without completely freaking out his father. He continued to wear the tutus – he’s also very solidly himself.

She worked her way through every sport available to man (and woman) before setting her sights on co-ed flag football.  Now she wants to play rugby.

On top of it all, the girl is, quite literally, a rock star.

She participates in The School of Rock – her primary weapon is the electric guitar, but she is equally thrilled to sing, play percussion, and even throw in a little bass action.

When it comes to performance attire, she continues her “her-ness” streak and pretty much wears whatever she thinks is cool at the time. She’s partial to a blazer, a hoodie, and a hat.

All of the other girls tend to wear dresses, fancy things, borderline sexy things. I am happy for her not to head in the sexy direction. So wrong on a 12-year-old.

For some reason, her upcoming show season (the musical stylings of Michael Jackson) has her taking a different tack as far as what she’s going to wear.

First she wanted to emulate The King of Pop. She mulled over sequined socks, the single glove.

That passed. Probably a good thing.

Last night on our way back from her practice I asked if the other girls were talking about what they were going to wear.  She said yes and looked a little thoughtful.  Perhaps sheepish.

I said – Are they dressing in fancy clothes? Dresses?

I said – Do you want to wear something like that?

So last night we went through her closet and picked out an outfit that is totally Sprout. Yet totally the rock-star girl version of her. 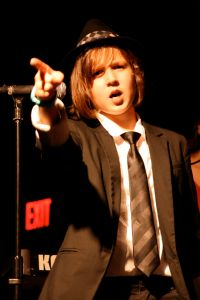