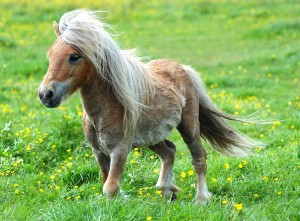 I need a pony.

Just a small one.  And probably just temporarily.  But right at this moment, a pony would be just the thing.

Because I am in desperate need of good news to tell my children.  News that will make children jump up and down and scream with joy.

Because right now, I have no good news.

I don’t mean this to imply that things are bad.  Things are actually very good.  Everyone is healthy, well fed, under a nice roof, with lots of toys and video games.  Grades are good.  Kisses and hugs are being handed out with great abandon.  New jobs are oh-so-close by on the horizon.  Vacations are being planned.  The snow has melted and spring is, well, springing.

But the big news seems to tend to be not-so-happiness inducing.

“Hey guys…Dad is getting his own place.”  Not surprisingly, this was not met with cries of joy.  Yay!! A new house!! WOO!!

We got through that transition and all is reasonably well.

Then last week we had new news.  “Hey Guys…you know your best friends next door? They’re moving super far away.”

My daughter hyperventilated.  My son ran to Google “How to stop someone from moving” (brilliant information-seeking behavior I must say, and yet sad).  Then he told me he hated me for telling them the news.  Sad face.

So I scanned the horizon…what is coming up that is good news? What can I pull out and distract them with to divert attention from the negatives?

For me, an excellent distraction is new lip gloss.  I know, shallow.  Yet therapeutic in it’s own way.

While focused on the latest shade of pink sparkliness I can hypnotically avoid negative thoughts.  Oooo…sparkles!

So immediately I thought – what is the kid equivalent of a shiny new lipgloss?

A pony!! Sparkles the Pony!!! That would be just the ticket.

Because next up is – “Hey guys…we are moving.”

I can’t see that one going over any better than the last two.  But if our new house had room for a pony – just a tiny sparkly one – that could be fun, right?

I told my daughter that I wished I could offer a pony to cheer her up.  She said she doesn’t want a pony.  She wants her friends.  And her Dad.  But she’s comforted by the fact that we don’t have to move.

What is better than Sparkles the Pony?  Anyone?