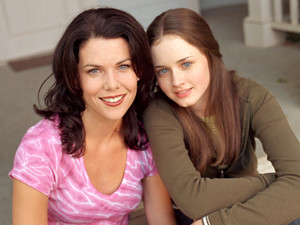 I am generally fairly confident in the quality of my mothering.  I try to be cool enough to not embarrass, yet uncool enough to maintain the appropriate levels of fear and respect that lead to compliance in areas like hygiene, safety, and some semblance of manners.  My kids are turning into awesome people and we get along very nicely in our one-parent-two-kids world.

But then I started to watch The Gilmore Girls and now all bets are off.

I kept reading things about what an awesome show this was and finally, almost 6 years after the finale, I have gotten on the bandwagon.  I love this bandwagon. Somewhat obsessed with it really.

She and Rory are best buddies. They hang out together all the time. They talk about everything. Everything. Willingly.  Without begging or bribes. I have yet to see a hormone-fueled argument about whether serving vegetables indicates a mother’s desire to kill her children with grossness.  Come to think of it, I also haven’t seen a vegetable served  – they seem to live on pizza and PopTarts.  Which also somehow seems utterly awesome.

She drinks coffee like a maniac (this part I can do!).  Every man who meets her is left in awe. She’s the cool mom that takes all the kids to a concert and lets them have her good seats.  She drives a Jeep. She’s just freaking awesome.  I kind of hate her.  And yet I mostly love her and want to be her. 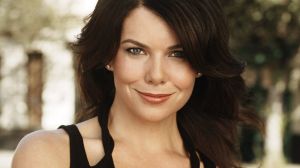 I want to work at an Inn. I want to wear mini-skirted suits and high heels while I work at said inn with my adorable friend who cooks for me.

(Did I mention that I’d also like Melissa McCarthy to be my best friend? Not the Bridesmaids one, though. She’s scary.)

I want to live in a tiny quirky town where everyone knows everyone and the guy at the diner is all hot and secretly deep.

I don’t actually want those things. Not the real life version of them anyway – but the TV version is very appealing.

I mean sure, she’s totally fictional and all. Other people write her amazing dialogue. Her 16-year-old “daughter” is actually someone paid to pretend to get along with her all day long.  Their town and adorable house aren’t real.

But sigh. What if they were?

Guess what I am doing this weekend?

I made the mistake of telling my daughter, Sprout, about my new hobby and she asked if she could watch, too.  She’s only on episode 3 – but she is also in love and I fear it’s only a matter of time before she decides that she wants to be Rory. Although if she wants to be Rory in the studious, kind, unquestionably loving and doting on her mother sort of way, I am utterly down with that.  If she wants to move to Connecticut, go to private school and find a cooler Mom, then not so much.

Poor Tater doesn’t want anything to do with this whole thing. He endures the episode replays from his sister with barely concealed horror. The Gilmores hold little allure for a 10-year-old boy, thank goodness.  Because if he doesn’t watch, my aura of awesomeness might not fade in his eyes. Not yet anyway.

I have 6 more seasons to go – at my current rate of consumption I should be done around Thanksgiving. I am sure by then I’ll be over my girl crush – or deep in the midst of my plans to relocate to New England and invest in mini skirts.

Turns out that the show was actually filmed in Ontario, which feeds into my unfounded obsession with moving to Canada.  Because it seems like here, but more exotic.

Which I guess is pretty much parallels why I am all caught up in GG.  I love that she’s a single mom with a happy, well-adjusted kid who is doing her best to make the most of her life.  That’s pretty much what I have going on for real.

But with the addition of a boy, a dog, and vegetables.

The fictional version is a lot sexier and more exotic – but I think mine is the one I’ll keep.  Sorry, Lorelai.