I started to tell you the dripping shower saga a few weeks ago.

Last weekend, I broke down and called in the big guns.

No, not the plumber.

He brought tools and a plan.

Gotta love a man with a plan.  And tools.

His plan: Use a Dremel tool to grind a new groove across the very-stuck screw and then use a regular screwdriver to bust that baby out of there.  This was quite similar to a plan presented by my friend, Dave, via Facebook. But with power tools. Power tools make everything better.

We had 15 minutes before we had to leave for Tater’s baseball game, so we went to survey the situation.

Power cords were unfurled.  The Dremel tool was assembled and plugged in. Safety glasses were donned.

Sounds like there should have been music for that.  But no.

He got out the big screwdriver. AND HE TOOK THE SCREW OUT!!

OMG. After four (4!) unsuccessful attempts and a lot of screaming and yelling – the SCREW WAS OUT!

I did a happy dance.

We started to move forward in the disassembly process.

We removed the shower handle.

The metal plate on the wall of the shower.

The retaining clip that holds the shower cartridge in (the goal of this entire project was to replace that very cartridge.)

The directions I had found on the internet said:

You will need to remove the cartridge and take it with you to the hardware store to get an identical replacement. If you have trouble getting it out, use the removal tool that is packaged with the new cartridge.

Do you see the problem there?

Luckily I had purchased two different sizes of cartridges and one of them was the right one. There was a little plastic thing that was apparently the “removal tool” but that was not at all helpful in removing anything.

At this point we had spent far more than our allotted 15 minutes and  baseball was calling. Well, Tater was calling saying he had to go to baseball. Same difference.

When we came back from baseball, Sprout accompanied her PopPop upstairs to “help.” Actually she was super helpful as she did figure out how to get the old cartridge out. That’s my girl!

Finally it was time to put the new part in. I joined the party as we jammed, pushed, and rubber-malleted the new cartridge into place and carefully remembered the order of all of the other pieces that needed to go in.

The little retaining clip thing was hesitant to slide back into place.  We tried to push it back on with a wrench.  A wrench and a mallet. A wrench, a mallet and some pliers.

As Dad turned the other way to find another banging device, I lifted the tiny little clip out of place to investigate what the problem might be and promptly dropped it into the hole in the wall. Waaaay down in there.

So – problem solved right? Don’t need to figure out how to get it to fit now. I meant to do that. Because I am a helper.

There seemed to be enough resistance and enough other parts that the new cartridge isn’t going to come flying out of the wall any time soon. But if it does, I will know EXACTLY why.

Finally it was all reassembled.

Then we found another little piece of plastic.

So we unassembled a bit and re-reassembled.

Tater joined me for the very exciting task of turning the water back on. My Mom looked vaguely panicked as she braced herself for the oncoming flood.

And it only took: 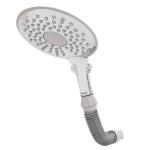 1 twelve-year-old who knows how to make things work

And one super amazing hero of a Dad :)